The early British parliamentary election – three years early !! – may be a significant sign that Brexit will neither be as swift or as surgical as promised.

The original Govt plan was Brexit done and dusted by Mar 2019, setting up a triumphant election campaign by May 2020.

Why rush now to get the election over first?

My hunch is it’s a defensive move in case Brexit involves messy compromise or needs a transition period afterwards.

It’s a thought I will develop in speeches for my clients over the next 6 weeks and beyond! 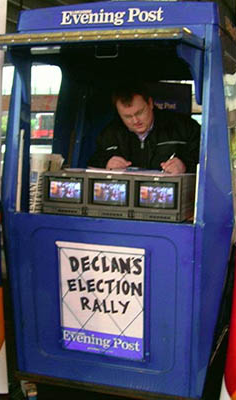 Some immediate thoughts as the Prime Minister seeks a general election for a new UK parliament.

1. It’s unexpected, but hardly a surprise – the Conservatives have been strongly ahead of Labour in the polls for ages. Meanwhile her majority in parliament is workable but relatively thin.

2. It’s a massive u-turn; Mrs May had ruled out an early election but the press will forgive her – um, untruths ? – if only because an election is exciting (the public doesn’t agree btw – newspaper sales often dip in elections).

3. The parties are already having different conversations with the voters. Conservatives and Liberal Democrats will try to make this an election about Brexit. Labour’s leader is framing it as a choice on broader economic decisions, austerity and inequality. If the conversation is dominated by Brexit and Labour does not engage in a meaningful way, it risks being ignored by voters – particularly in England. (see note on Scotland & NI below …)

4. The Conservatives – even its Remainers – can sort-of unite around a “delivering Brexit successfully” platform. The Liberal Democrats can happily campaign as anti-“hard Brexit”. For Labour, it has to satisfy both “old Labour” supporters who voted for Brexit and globalisation-minded supporters who voted to Remain. It needs to communicate clearly how it would implement Brexit successfully, minimising its risks and maximising its opportunities while safeguarding welfare and employee & consumer protection and enhancing the UK’s international competitiveness.

5. Labour’s opposition in some of its English seats will not be the Liberal Democrats or Conservatives; it will be UKIP, adding another layer of complexity to Labour’s Brexit positioning.

6. The Lib Dems will hope to attract frustrated Remainers from Labour in big numbers. That may deliver it more seats in Remain regions but what does that do for the party in parts of the country that wanted Brexit? And – will it be any more than a protest vote ? If the Lib Dems have a host of new Remainer MPs in the new  Parliament, will they work to improve the Brexit deal or just frustrate Brexit entirely?

7. Mrs May is riding high in the polls but it will be astonishing if she
maintains that lead. Campaigns are a ferociously-hot spotlight, and her performance in Prime Minister’s Questions etc makes some supporters worry that she’s not the strongest performer on the hoof. But if Lab and the LDs split the vote in England, even a small lead will be enough for a big majority.

8. In Scotland, the Brexit conversation will become about independence – about the merits of the British single market vs European single market, with the SNP campaigning to – as they see it – defend Scotland’s economic interests by frustrating a hard Brexit and possibly exiting the UK so it can return to Europe. If there is another strong performance by the SNP, that would surely make it more likely that another independence vote will follow — and weaken the UK government’s ability to resist IndyRef2?

9. In Northern Ireland the Brexit argument crosses traditional community divisions – the Nationalist parties are strongly for Remain but even the officially pro-Brexit DUP has its Remainers. And there are deep concerns about the impact of Brexit on tourism, food & farming, freight transport and industries with cross-Border supply chains. But it is just two months since the last election for the NI Assembly, and the highly-polar result and failure to agree a new Executive may make this General Election about tribe and  community, not Brexit.

PS: The campaign will also be expensive for the parties. There was a prospect of ANOTHER Assembly election this year if they can’t form an Executive; perhaps the expense and sheer electoral fatigue force them to do a deal after all?